Bipods are a shooting accessory that is often overlooked. Why? Because they just aren’t as sexy as the newest gadget or gizmo that promises to increase your ability to shoot. The difference is that bipods have been proven to be an effective tool for shooting accurately. They’ve been around for a long time, served with militaries, police forces, bench rest shooters, and anyone else who takes accuracy seriously. The idea of a bipod is to provide a stable shooting position. From there you build up with quality, durability, and extra features. Luckily, bipods tend to be an affordable and common accessory with tons of different variations.

The Fire Club is a fascinating multi-purpose bipod. It doubles as both a bipod and a grip. What it is not is a grip pod. A grip pod is one of those vertical foregrips that has a spring loaded bipod that pops out of the grip at the press of a button. The Fire Club bipod is a lot different than that. The Fire Club has traditional bipod legs that fold down or rearward for easy carry and transportation. In the middle of the bipod is a separate vertical grip that is fixed in place. 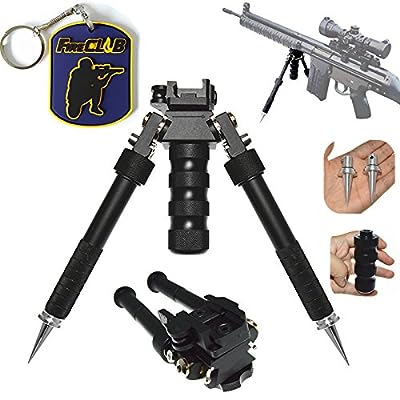 The foregrip can be removed from the bipod setup if it’s not desired in one situation or another. The Fire Club bipod is perfectly designed for modern rifles like the AR 15, the SIG 556 series, or any modern rifle with a picatinny rail. This bipod attaches directly to a picatinny rail and uses a QD mount to engage or disengage the bipod. It can be tossed on in an instant or removed just as fast.

The Fire Club is made entirely made from aluminum and is quite well made. It can bear the weight of heavier, and more powerful rifles. This includes full powered battle rifles like the AR 10 or M1A. The smaller moving springs and fasteners are made from stainless steel and are anodized to prevent corrosion.

The feet have two options for stability. The first is rubberized circular feet that are perfect for hard solid objects, or for shooting off man-made platforms. The second option is spike feet which can be swapped in the field. Simply use a bullet tip on each leg to remove the rubber feet, and press the spike feet into play. The Fire Club bipod is an interesting dynamic design that serves multiple purposes.

Hunters never know exactly what the terrain will look like when that perfect shot comes into play. There may not be a rest or no safe way to get in the prone to use standard bipods. That is where these bipods come into play. The Ade Advanced Heavy Duty bipods are quite long and allow a shooter to take a sitting position, or use a low object as a rest. The main attraction to these optics is the fact they extend from 13 inches to 23 inches. The legs themselves can be independently extended to meet uneven terrain.

The bipod system attaches to a standard sling swivel, and it you are using a modern sporting rifle Ade has your back. The kit comes with a rail to sling swivel mount that will attach to any standard picatinny rail and mounts a nice sling swivel. The entire bipod is made of metal, specifically 7075 aluminum, something very similar to what AR 15 receivers are made from. The cradle is heavy duty steel, and the springs are an equally heavy duty. The legs are strong and reinforced well.

Even though it is a well built, and strong bipod it is quite lightweight. At only 14.1 ounces you are getting a lot of bang for the weight cost. One of the unique features is the hinged base that has tension adjustment to eliminate natural tremors. This is a critical function since the legs are so long the tremors can be felt more than a shorter bipod.

Using these bipods is simple and intuitive. They are mostly silent with a few light clicks here and there as they are adjusted for length. These bipods are simply made and well priced for the function they serve. For a roaming hunter, these bipods offer a high level of versatility and options for quick and stable shooting.

Simple, short, and effective are the best ways to describe the UTG Rubber Armored bipods. At the same time they make use of various materials to create a simple, but effective system for modern sporting rifles. Don’t take the word rubber to mean these bipods are made of rubber. They utilize heavy duty full metal construction to take the weight of various rifles, and the recoil of powerful cartridges.

The system is simply coated with a rubberized coating. This rubberized armor acts to protect the bipods from harsh falls, bumps, and dents when being used roughly. The rubber coating acts as a simple, but effective means to protect the bipod from the elements as well. It also makes the bipod easier to handle when it’s both extremely cold or very hot. Metal tends to accentuate heat and cold and can make handling a bipod quite uncomfortable at the wrong time of the year.

The UTG bipod is designed for use off of platforms or in the prone position. With that in mind, the legs are 6 inches are their shortest and 8.5 inches at their longest. The legs are fully adjustable, and there are five different positions for the legs to extend to. The legs can be extended independently of each other which gives the user the ability to match the terrain they’re shooting from.

The UTG Rubber armored bipod is versatile for different weapons. It comes with mounts for both sling swivels and picatinny rails. The picatinny rail mount is even a quick detach variant with a simple lever disconnect and lock. The UTG rubber armored system also features the ability to pan left and right by simply moving the gun slightly. The UTG bipods also have non-slip rubberized foot pads, and the legs can fold forward or rearward. The legs can also be positioned to shoot off a barrier by being tilted slightly forward.

The UTG bipods are perfect for tactical applications, sport shooting, and for simple plinking. They are lightweight, tough and versatile for different rifles and applications. They are also affordable and easy to install. You really can’t go wrong with the UTG rubber armored bipods.

Harris is a name that is almost synonymous with high-quality bipods. If you are involved in any kind of tactical shooting the Harris Engineering bipods are for you. They are excellent for high-speed shooting sports and dynamic shooting environments. If you have to rush, throw your rifle down, take a shot and move the Harris bipods are for you. 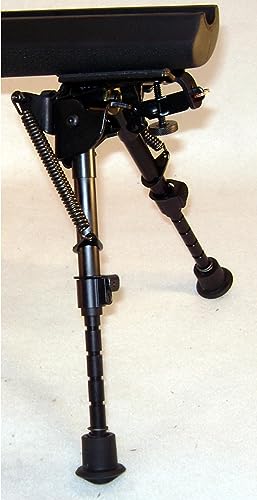 Harris Bipods are in use by the United States military and served on the Marine Corps Mark 12 Special purpose rifle. The Harris bipods are built tough and proven in war to be dependable and tough. I’ve seen these bipods in action over two deployments, and they never let the user down. The S-BRM models are lightweight at only 13 ounces and extend from 6 to 9 inches. The extensions are done in one-inch increments and are very precise. The legs can be extended independently of each other. These are the exact model used by designated marksmen in the United States Marine Corps.

The Harris bipods are made from lightweight, but hard alloys. The steel is treated to protect it from corrosion and moisture with anodization. The bipods attach via sling swivel, but Harris is clever enough to allow you to retain a sling swivel. Mounted on the bottom of the bipod is an additional sling swivel for your convenience. The bipod utilizes a quick detach system that is convenient and simple.

The Harris bipods have hinged bases that feature tension adjustments that compensate for shooter induced tremors. This also eliminates any noticeable looseness in the crotch area of the Harris bipods.

In tactical situations, where lives are on the line, you really need something like the Harris bipods. They have a proven track record of dependability, ability to withstand heavy use and to work in a multitude of environments. From the outside, there is nothing superbly fancy about them. They appear to be simple bipods. They are simple sure, but they are also tough and will keep working no matter what you throw at them. When lives or glory is on the line, the Harris bipods will perform and not let you down.

Blackhawk is a company well known for their line of tactical gear. The Blackhawk name is often synonymous with pistol holsters, slings, knee pads, and load bearing equipment. In the last few years, they’ve rolled out their Sportster line of gear. Based on their tactical gear the Sportster line is more affordable and based less on tactical applications and more on sporting use. Not to say it is of lower quality, but sporting use in often different than tactical use.

The Blackhawk Sportster bipod is one such sporting item. The Sportster certainly doesn’t look much different than a tactical bipod. It is designed for target shooters, competitors, and hunters who need an edge in rifle stability. The bipod attaches directly to a sling swivel and gives the user an excellent platform for increased stability and accuracy.

It’s built to last, and to take some bumps and bruises along the way. The legs are made entirely of aircraft grade aluminum. There are a few Blackhawk Sportster bipods, but this model is my personal favorite. It has an adjustable height of 9 to 13 inches and can pivot and traverse. The ability to pivot and traverse allows the shooter to observe and wait to take a perfect shot if your chosen target is moving. Pivoting also eliminates the need to cant your rig when shooting over uneven terrain.

The spring return telescoping legs are simple to extend and lock into place with a rock solid locking system. Should you place them on a platform or the ground with a little too much zeal they won’t collapse or break. They are superbly strong and able to take the full weight of a full sized rifle with ease.

When you hit the field or the range you want something that is functional and easy to use. In fast-paced shooting sports you have to worry too much about accuracy and speed to worry about your gear failing. When hunting you may be hours from civilization and have no ability to replace broken gear, so what you have needs to works and needs to work well. The Blackhawk Sportster is capable, dependable and well made to suit your sport shooting needs.

When selecting a bipod, make sure you consider the primary purpose of your rifle. This can save you money on a bipod if don’t need X, y, Z. It can also save you stress by spending just a little more money when you really need X, Y, Z. Consider your needs, your wants, and make an informed decision. No guesswork is allowed here.